Ding Yanyong, a second-generation Lingnan School artist, pioneered introducing Western Modern Art into Chinese art. He was a leading figure in the revival of ancient Chinese traditions for modern expression. His work combines Chinese and Western aesthetics to achieve a synthesis of the two artistic traditions. Characterized by its boldness and calligraphic expression, Ding\'s artistic style in oil and ink paintings of flowers and birds, as well as of figures executed naïvely and satirically, have led to his being called the "Matisse of the East". He was born in the Guangdong Province and attended (1919-1925) the prestigious Tokyo School of Fine Arts where he became an accomplished painter of the Fauvist and Expressionist styles. He was, at that time, one of the first Chinese artists who went to Japan to study Western painting. On his return to China, he worked to reform traditional Chinese art by being involved in the New Art Movement, which promoted the inclusion of Western modern art. In the late 1920s and early 1930s, Ding\'s work to integrate Chinese and Western art led him to study the native traditions, ancient calligraphy, painting, archaeological artefacts, archaic seals, as well as the works of Bade Shanren (1626-1705). A look at Bada Shanren\'s paintings makes it clear how his style (both for drawing and painting) influenced Ding\'s work. Ding taught Western painting in the art academies in Shanghai, Guangzhou, and Chongqing, and continued teaching in Hong Kong where he moved to in 1949, In 1957 he became one of the founders of the Fine Arts Department of New Asia, incorporated into the Chinese University of Hong Kong in 1963. He died in this city. Before 1949 his work was shown in China. After that, it was exhibited in Hong Kong and many countries around the world.

The painting displayed here is typical of Ding\'s style: a hôô bird (a Japanese representation of the phoenix) sits on a peach tree branch looking at some peaches above mischievously. The hôô bird can be mistaken for the red-billed blue magpie but although both have very long tails, the latter is partially blue, as its name suggests. It is unlikely Ding would have chosen this bird to omit any use of blue. Ding\'s drawing is bold, for example the leaves, branches and bird. The way in which the peaches are painted illustrate Ding\'s high artistic ability. Pink and yellow inks are used to give the fruits a feeling of depth and an ethereal quality at the same time. In Chinese mythology, the hôô bird is considered a messenger of goodwill, while the peaches mean immortality. To express the wishes of goodwill and immortality through this colourful, happy and accomplished painting is no doubt a special gift. 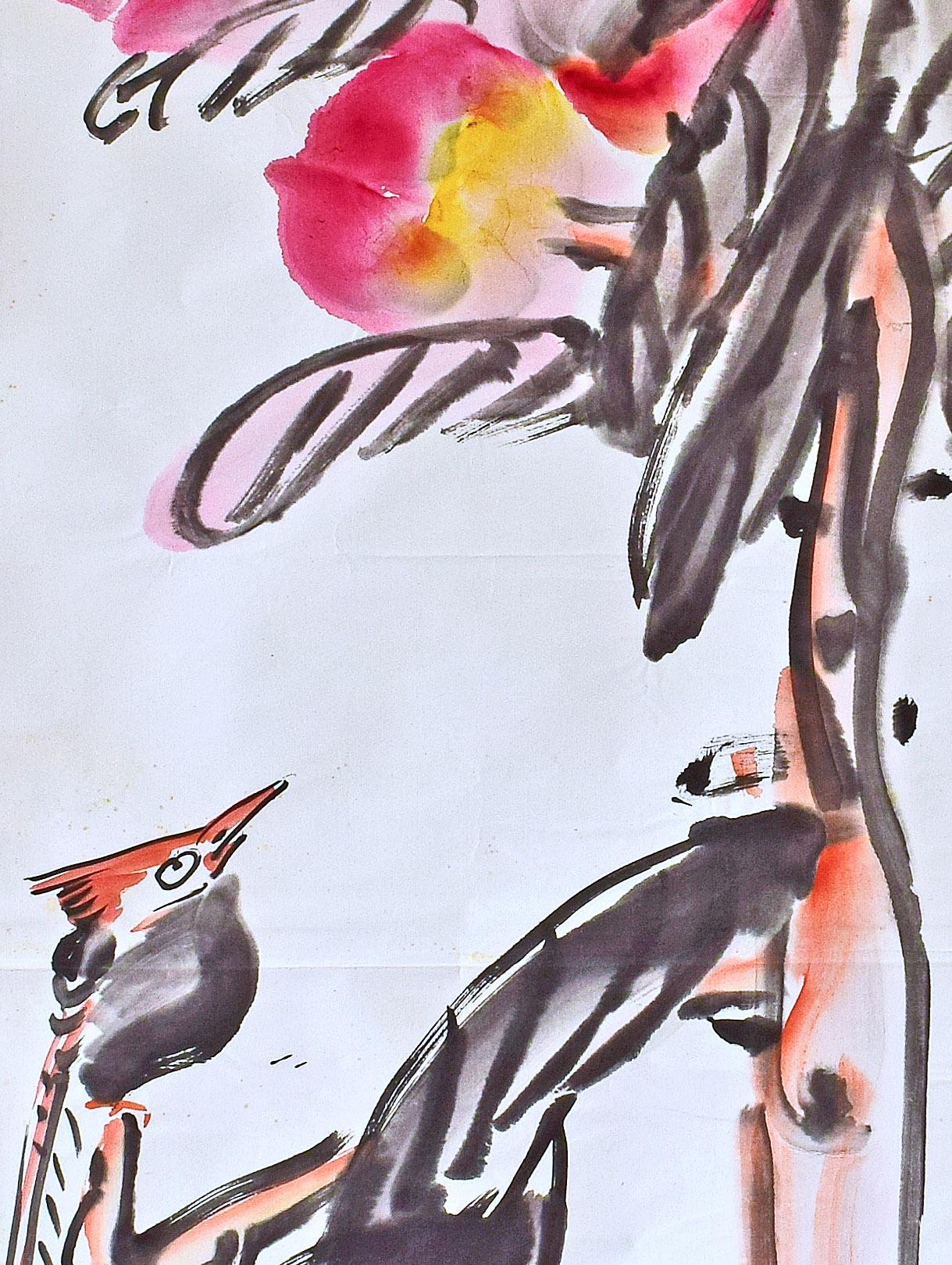